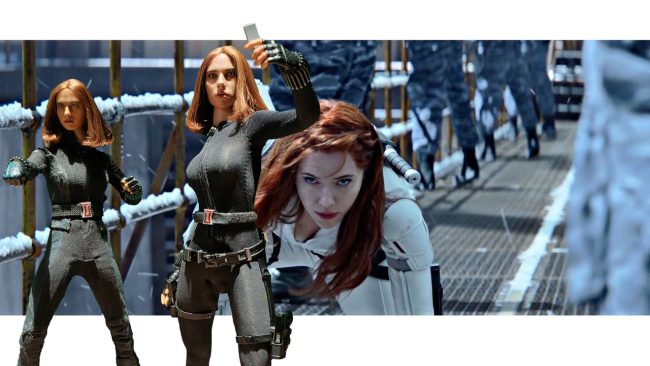 The journey of restoring the Black Widow Winter Soldier MMS 239 came with many lessons learned. The kitbash download will include information about 3 versions. The videos showcases are on our youtube channel and in association with Steel Game, we have put together the series to watch and view more details. We have also provided HD images as an extra for those who donate to support our channel and site.

About the Action Figure

Agents of S.H.I.E.L.D.s has female spies, Black Widow, featured in Captain America’s The Winter Soldier was one of them. Hot Toys’ movie masterpiece series create the MMS 239 Black Widow Sixth Scale Collectible Figure. It was crafted based on the image of Scarlett Johansson as Black Widow in the film. Many may debate that the head sculpt doesn’t look like her at all, we feel the opposite.

This action figure was crafted with a one-piece black colored jumpsuit with leather-like trims(pleather) which did not withstand the test of time. Areas around the holsters and boots hid the early start of the degradation that spread to all areas of the pleather. It at first added a nice effect, but as the material started to flake more, it soon was clear it had to be fixed because it left small flakes all over the place as they broke off.

While researching a way to fix what was happening to the action figure, we learned that this was a common issue. Several collectors have covered various ways in which they repaired their action figures from broken parts to damaged clothes. Some of these methods were painting over the damaged material after stripping away all the bad pleather. Each seem to have their own preference of type of paint to use. Some would just peal away the infected parts.

As collectors, it was clear that no matter what method we used to fix the clothes, it was going to either effect the value for better or worse. Some of the of the items of concern were, could we repair the original material to keep as much to the true out of box look. If we couldn’t repair it could we preserve it such that the damaged part would just be covered and the patch could be removed to reveal the true condition. And, if this could not be done then what would be the best solution that kept this action figure looking great.

Small test were done on very small areas or on pieces that flaked off to try and use an adhesive to glue things back in place. These tests proved to be more damaging and often dissolved the material. Covering the damaged area showed promise, but removing the new material seem to cause more flaking to fall off.

If you are reading this before you have dived into your own project, then you are the lucky one who gets to choose some methods that you too might find helpful in the preservation of your collectible action figure.

First note that the Hot Toy Body used is of small stature, and in most cases when posing the head seem a bit large. The articulation is very restrictive of the very posable body which was used. This body is very common and can be found for less than 35.00 USD around the world. Second we chose to upgrade our action figure and if we had not caused more damaged, would would have two showcase action figures from one.

We suggest that you carefully remove all the pleather on the pants and torso region and try not to remove the thin strip area between the two type of material. (the seam). Although this will take away the glossy latex look, it still does not look that bad and it provides the least amount of changes to the action figure.

The next solutions can be use with the original body or the upgraded body, but we will say that the jumpsuits tend to be baggy and don’t look as good as with the upgrade body. We tend to like our super heros/heroines in tight fitting costumes and the Black Widow is no different.

Transfer the parts and create an action figure using a super flexible body. The outfit moves from a one-piece jumpsuit to a two piece top and matching bottom. A solid black turtleneck top looks great and the only thing missing is the front zipper. We understand our solution moves away from doing a movie replication of the jumpsuit. On the other hand much is gained when you don’t have a team who can fabricate a new jumpsuit, the articulation is increased, the material will hold up to extreme posing and the outfit will last much longer than pleather.

As in version 1.0, instead of a two piece, we opt for a one piece(pleather) jumpsuit which can be found from many sellers. Because this is a generic jumpsuit, it is not fitted for the body like the Hot Toys jumpsuit which was tailored for the body they chosen to use. It does closely resemble the original jumpsuit with the latex look and zipper and being a one-piece. Articulation is slightly better but there are some pros and cons. It is pleather, it buckles such that it does not look as clean in extreme poses and it doesn’t have the upper jacket like look of the original jumpsuit.

So hands down we are very pleased on how the version 3 of the jumpsuit works. It is of cloth material(no pleather). It is highly elastic so it give a tight fitting to the body and allows for extreme posing with very clean look and no bulging of the material in the extreme poses. It has a zipper to allow for various open jumpsuit displays to show the more sexy side of the Black Widow, which in comic books she is known for.